The waters off Brier Island and the Bay of Fundy are the summer feeding ground, nursery and play area for dozens of marine species. Strong tidal currents bring nutrients close to the surface, increasing the productivity of plankton. The plankton attracts large schools of herring and mackerel, which in turn provide food for whales, dolphins, seabirds and a colony of seals.

The number and variety of shore and seabirds in and around Brier Island is nothing short of spectacular. In the fall, the island is a popular stopover for hundreds of migrating warblers, shorebirds and raptors. The prestigious adventure tour company, Field Guides International Incorporated of Austin, Texas suggests birders can "expect the unexpected - Brier Island offers unparalleled opportunities to study shorebirds up close."

In the late spring the finback and minke whales and harbour porpoises are the first to arrive from their southern breeding grounds. In June, the humpback whales return, and, by late June, are abundant. Also white-sided dolphins are often observed. By mid-July all five species are commonly sighted and usually remain until fall.

The endangered North Atlantic Right Whale, White-beaked Dolphins and Pilot Whales are ocassionally observed on our whale watching tours. Beluga, Sperm and Blue Whales are known to inhabit the region, but are rarely seen. There are also occasional sightings of Bluefin Tuna, Sea Turtles, Ocean Sunfish and Basking Sharks on our tours; bird species include Atlantic Puffins and several varieties of gannets, petrels, shearwaters and phalaropes.


It is important to note that each Mariner Cruises Whale & Seabird tour of the Bay of Fundy provides an opportunity (and often, a once in a lifetime opportunity) to observe firsthand some of the largest and rarest bird and animal species in the world. Observing their behaviour, in their natural environment, is a thrilling and rare privilege. Our captains and crew are committed to the preservation of this important eco-system and to providing a unique sea adventure with the minimum of disturbance to these magnificent creatures.

A Mariner Cruise also provides outdoor enthusiasts with an opportunity to experience the famous Bay of Fundy tides (the highest in the world), view ancient basalt rock formations, observe the Peter's Island Bird Sanctuary and gain insight into the local history and geology of the region. All cruises are narrated by experienced local naturalists. 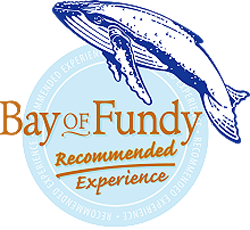